While we are still waiting to receive a formal response from the Program’s Counter-Proposal to UVM, we’ve been following some great media coverage about the UVM Historic Preservation Program lately. Check out this article from 7 Days. Full text here.

With a UVM Program Threatened by Cuts, Does Historic Preservation Have a Future in Vermont? 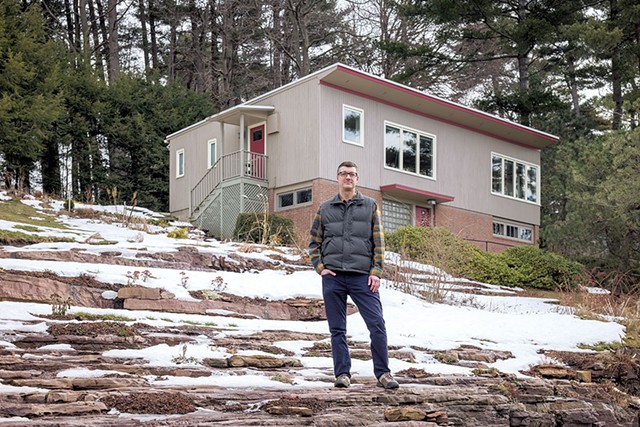 On January 24, the preservation experts of seven northeastern states, including Pennsylvania and New York, convened for a webinar on historic barns, hosted by the New Hampshire Preservation Alliance. One of the three invited guest speakers was Tom Visser, professor and director of the master’s of science program in historic preservation at the University of Vermont.

In the subsequent breakout session for Vermont, the main speakers, Vermont state architectural historian Devin Colman and Preservation Trust of Vermont field service representative Alex Tolstoi, greeted each other familiarly. Both graduates of Visser’s program, they gave a shout-out to a third grad, Caitlin Corkins, tax credits and grants coordinator at the Vermont Division for Historic Preservation, who didn’t make it to the event.

What these professionals didn’t mention was that their common graduate program was on the chopping block. On December 2, Bill Falls, dean of UVM’s College of Arts and Sciences, proposed phasing out 12 majors, 11 minors and four master’s programs. Aimed at culling low-enrollment programs, the cost-cutting measure is designed to combat the university’s $8.6 million deficit for fiscal year 2021. (Learn more about it in Seven Days‘ January 27 cover story, “Major Fallout.”)

We look forward to seeing you this evening.  View the agenda here.

While many have already heard the distressing news, it is with great concern that we write to share that the University of Vermont has proposed eliminating our beloved Historic Preservation MS program.

The UVM Historic Preservation Alumni Association is springing into action with plans to help organize a vigorous response.

* Looking for specific project case studies to tell our story

* Consulting with Tom and Bob to create a fundraising strategy to support the program, with both short-term immediate pledges and longer-term support for the endowment through planned giving – more information on that coming soon

What can you do?

Connect with the Alumni Association! We want to capture current contact information for every program alumnus so we can keep everyone informed and involved. Email uvmhpaa@gmail.com by Friday, December 11 with your contact information and the answers to these three questions.

1. Are you currently a working professional in Historic Preservation or a related field? Or a retired professional?

2. Do you work in: a. The private sector; b. For a non-profit organization or c. in public service at the local, state, or national level, d. Another preservation-related/tangential role? If you are willing to share the name of your company/organization, please do.

3. Would you consider a one-time donation or pledge to the program?

Spread the word! Share the news among your classmates and UVM HP networks. We want to make sure everyone has a chance to voice their love for the program and to share the impact that it has had on building, revitalizing, and sustaining communities nationwide.

Find additional supporters! Reach out to friends of the program, partners, and influencers who may not be alumni but who know our work and ask for their support. Every voice counts.

We will keep you abreast of our progress as we gather and share information with Tom and Bob, University officials, and other influencers. Creating a united effort is our best chance to save the program.

The UVM HP Alumni Association Board of Directors

If you individually want to reach out directly to the University now, emails and letters can be directed to:

If you are unable to attend and would like to call in, please email kaitlinoshea@gmail.com for conference call number and passcode.

Please submit your nominations for board members and officers. You are allowed to nominate yourself!

Family and friends welcome to join us for the holiday party. Snacks will be provided. Cash bar. Hope to see you there!

If you are unable to attend and would like to call in, please email kaitlinoshea@gmail.com for conference call number and passcode.

Please submit your nominations for board members and officers. You are allowed to nominate yourself!

Join the UVM HPAA and current students for some networking, preservation talk, and catching up. This casual, family friendly cidery has good food, daily specials, and excellent cider. Hope to see you there! Friends and family are welcome.

If you have questions, email kaitlinoshea@gmail.com.

The annual UVM Historic Preservation Program Welcome Reception to be held on Wednesday, August 29, 2018 from 5 PM to sunset on the Wheeler House west veranda. Historic preservation students, alumni, faculty, friends and guests are cordially welcome to attend. The UVM HP Program will provide pizzas, but everyone is encouraged to bring some munchies or salad or dessert and a non-alcoholic beverage. Spread the word!

The Aldrich House was the home of Carrie Brown, Calvin Coolidge’s school teacher and subsequently his stepmother. It was later owned by Plymouth’s first cheesemaker, Eugene Aldrich and his daughter Ruth. For many years Ruth operated a tea room in the house. Built in the early 1800s, the house is a good example of continuous New England architecture.

We will be clearing out an attached barn at the Aldrich House, sorting and relocating historic artifacts and building materials currently stored there. The work is being carried out to prepare the space for a Preservation Education Institute workshop on the use of borates in historic buildings to be held in the building later this season.

Please dress for the event with work clothes and shoes. Lunch and beverages provided by the Alumni Association.

Please RSVP to Caitlin Corkins (caitlin.corkins@vermont.gov) by May 7.

Good news! The UVM HPAA NEWS, April 2018 edition is out! It includes a review of our 2017 activities, including the reunion, as well as our plans for 2018. Please take a look, share with others, and send us your feedback. Click to open a PDF copy of the newsletter. We’ll be emailing a copy and posting it on Facebook, too.

The HPAA Board is getting the 2017-2018 newsletter together. If you have photos of the 40th reunion or any other events from 2017-18, please send them to uvmhpaa@gmail.com. If you have a short (or long) article or exciting news that you’d like to include, please send it.